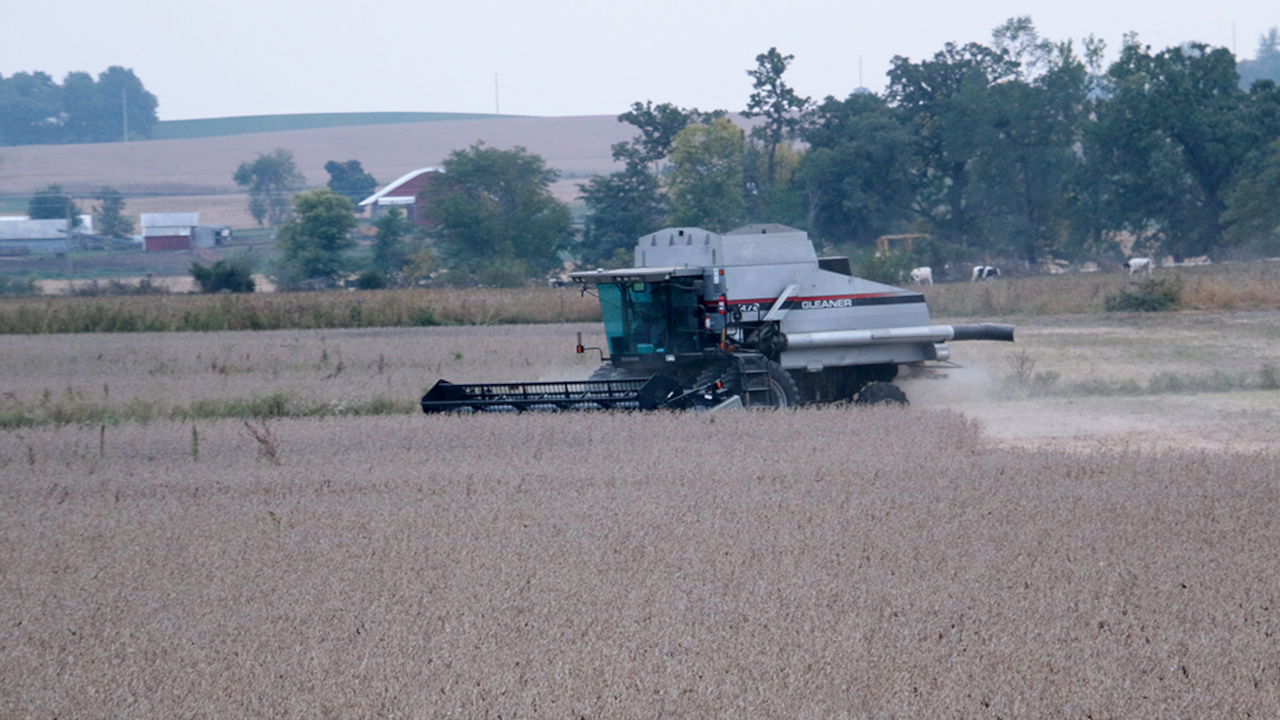 A farmer harvests soybeans on a farm near Ely in November 2021. Photo Credit: Richard Pratt

Cropland values in Iowa increased 2.8% for the period from March to September 2022, according to the latest Land Trends and Value Survey conducted by the Iowa Farm and Land Chapter #2 of the Realtors Land Institute.

The report comes on the heels of a 14.1% increase in cropland values from September 2021 to March 2022, resulting in a 16.9% year-over-year increase for the state of Iowa.

The Illinois Society of Professional Farm Managers reported farmland values in Illinois have also increased in 2022, with a 18% jump over the previous year. Read More

Lawmakers Ask for Review of Foreign Ownership of U.S. Farmland

U.S. House Republicans are calling for a federal investigation into foreign ownership and investment in U.S. agricultural land.

In a letter sent to the Government Accountability Office (GAO) in October, the top Republicans on the U.S. House Agriculture and Oversight committees are requesting the investigation, noting current efforts to track foreign investment are unreliable and could leave the U.S. vulnerable. The lawmakers questioned whether these foreign investments, including those by China, could pose a national security threat to the U.S.

The letter was led by Reps. Glenn “GT” Thompson (R-Pa.) and James Comer (R-Ky.), along with over 125 other House Republicans.

“We write to request a GAO review of foreign investment in U.S. farmland and its impact on national security, trade and food security, as well as U.S. government efforts to monitor these acquisitions,” the lawmakers wrote.

They noted that foreign ownership and investment in U.S. agricultural land nearly doubled from 2010 to 2020, according to data from the U.S. Department of Agriculture (USDA). Read More

Nathan Dorn, who farms near Firth south of Lincoln, said he’s already cutting back on spending for new cattle and next year’s crop due to lower yields and increased costs for seed, fuel and fertilizer that he estimated at $13 an acre.

Farmers used to test the quality of their soil by burying a pair of underpants in the ground and seeing how quickly they rotted.

The idea being that the more healthy micro-organisms there are in the ground, such as bacteria and fungi, the faster the fabric would be eaten away.

Bury the pants now and they may well be dug up the following year in pristine condition.

That's because, according to experts, more than half of the world's agricultural soil is already degraded. Read More

Farming and agriculture are a huge part of life in the ArkLaTex. Some of the best farmland in the world can be found here.

So much so that some say important and surprising people are investing in it, such as millionaires and billionaires who have decided agricultural land is a good place to put their money.

The list of names is long and recognizable. Just a few include Oprah Winfrey, Ted Turner and Amazon CEO Jeff Bezos. Read More

The California Air Resources Board is considering yet another regulation aimed at converting more vehicles to zero-emission engines.

Ahead of a Thursday hearing on the Advanced Clean Fleets (ACF) proposal, agriculture and trucking groups are raising alarms over costs, lagging technology and inadequate charging infrastructure. The added pressure on ports is sparking fears over triggering more supply chain disruptions as well. Read More

Farmers Say Cover Crops Are on 40% of Cropland

Cover crops are more popular than previously known, according to a USDA survey. Growers reported using cover crops on 40% of their cropland in 2021, suggesting a sizable increase from the 15.4 million acres of cover crops listed in the 2017 Census of Agriculture; the two dozen “principal crops” covered 317 million acres last year.

A large majority of farmers, 59%, said they employed cover crops on their farms, said USDA in the Conservation Practice Adoption Motivations 2021 report, based on survey of 34,000 farmers from May through September. They said cover crops were used on 40% of their cropland. It was the lowest adoption rate of six practices in the survey. Read More

How Can I Add Value to My Recreational Property?