Bryan grew up a few miles north of Sioux City, Iowa. He attended the University of Northern Iowa and earned a Bachelor’s Degree in Finance. Bryan focuses on the sale and acquisition of agricultural, recreational and development land. When he is not spending time with his family, Bryan enjoys hunting and fishing. Bryan is a licensed real estate salesperson in Iowa, Illinois, Minnesota, Missouri, Nebraska, North Dakota and South Dakota.

Steve Bruere is a nationally recognized leader in agricultural real estate and serves as the President of Peoples Company, a farmland brokerage, management, appraisal, and investment firm headquartered in Des Moines, Iowa. Throughout Steve’s tenure, Peoples Company has rapidly transformed from a small-town real estate firm in central Iowa into a full-service agricultural land transaction firm serving the country’s largest landowners, with a presence in all premier agricultural regions across the U.S.

Peoples Company’s core businesses are enhanced by Steve’s innovative ventures to capitalize on the financialization of the farmland asset class. These ventures include mAgma, a digital crowdfunding farmland investment platform; PC Ag Tech, which invests in ag-based business incubators and early-stage ag technology companies; and Alternative Equity Advisors, a real asset investment firm specializing in the acquisition and management of farmland under separate account structures for institutions and high-net-worth individuals.

Steve is a prominent voice in agriculture and highly sought after by national media for his expertise. He has utilized his extensive farmland knowledge to advocate for the industry and to collaborate with other leaders in agriculture. Steve has built a reputation as a national leader in sustainable agriculture through his efforts in helping launch Leading Harvest, the first comprehensive sustainability standard for U.S. farmland. He also serves as a trustee for the Iowa Nature Conservancy and member of Governor Reynolds’ Carbon Sequestration Task Force, and previously co-chaired Iowa’s Water Future Task Force.

Seeking to connect diverse stakeholders in agriculture, Steve established the Land Investment Expo in 2008. The Expo is known by industry insiders as a ‘must-attend’, premier event that serves as a critical venue to set the tone for the industry each year. Participants are exposed to a range of professional perspectives as controversial industry topics are addressed and debated. Steve has developed a vast network and built numerous long-lasting relationships by securing five-star presenters and keynote speakers such as presidential historian Jon Meacham, Skybridge Capital founder Anthony Scaramucci, famed businesswoman Martha Stewart, entrepreneur Kevin O’Leary, pop icon and humorist Ben Stein, President Donald J. Trump, and business legend T. Boone Pickens.

Steve’s enthusiasm for farmland began as a child on his family’s farm in Warren County, Iowa. His love and insight for farmland recently inspired him to break ground on Middlebrook, Iowa’s first agrihood, with the goal of uniting agriculture and urban development. Steve and his family live near this neighborhood and remain involved with his family’s farm, where they grow corn, soybeans, and organic produce under the Middlebrook Organics and Farmer Food brands.

The site is currently zoned C2 in the Enterprise District. The City of Osceola has indicated a willingness to rezone the property to the applicable commercial and/or industrial zoning district, or to create a new zoning district specifically applicable to the Site if necessary.

Osceola is served by the BNSF Railway, which owns the line of railroad tracks in Osceola. BNSF is a national railroad company that is one of seven North American Class I railroads and owns the second largest freight network. The Site touches a BNSF Spur and is approximately 1 mile from the BNSF Mainline. The Site is the only practicable location in Central Iowa where an industrial facility can locate and have access to the mainline. The owners of the Site have received assurances from BNSF that the spur may be utilized under appropriate circumstances. Previously, a $500,000 RISE (Revitalize Iowa’s Sound Economy) grant was approved to upgrade and repair the Spur to allow for industrial usage. The substantial value would be derived by a user connecting easily to the main intercontinental BNSF line due to lower shipping rates and transit times.

The Site is bordered on the West by the Burlington Northern Santa Fe (BNSF) Spur which connects the BNSF Mainline. LeAnn Drive borders the Site to the North and provides immediate access to US Highway 69. No rights-of-way, easements, or other impediments block access to, or development of, the Site.

Clarke Electric Cooperative power is available through both overhead and underground 3 Phase lines. These lines deliver 7,200 volts to ground, and 12,470 from Phase to Phase. Rate incentives are available.

Osceola water quality is good with the water system being owned and maintained by the City. The current water source is West Lake. The total permitted capacity for the system is 550 million gallons per year with average utilization totaling 430 million gallons per year. Excess capacity of at least 250,000 per day is available with additional capacity coming online in 2017 as a result of the construction of a new 800-acre water supply reservoir. Osceola water lines run from Town Line Road, north to LeAnn Drive. There are currently two separate lines, one ten-inch line that follows Main Street and a six inch line running through the property located to the south.

Osceola Waste Water Treatment provides sewer service and currently has a PVC line that flows south, westward along LeAnn Drive, then continuing south along Main Street. With a permitted capacity of 2.5 mgpd, the average utilization of the system is a mere 0.725 mgpd with a peak of 6.842 mgpd. The excess capacity of the wastewater system is listed at 1.875 mgpd.

Osceola is the county seat of Clarke County, which is located in south central Iowa. Osceola is located 36 miles from the Des Moines metro area, is adjacent to Interstate 35 (the NAFTA highway) and has exceptional rail connectivity with the BNSF Main Line passing through the city. Osceola is centrally located in relation to Kansas City, Omaha, Minneapolis, Chicago and St. Louis. Additional connectivity is available via US Highways 34 and 69.

• 1 mile from the BNSF Main Line via the BNSF Spur

From Osceola, travel north on Main Street (Hwy 69) for approximately 1.25 miles. Turn east on Leann Drive. The site is located on the south side of Leann Drive.

Use the Interactive Map to explore the property's regional location. Zoom in and out to see the property's surroundings and toggle various mapping layers on and off in the Map Layer Menu. 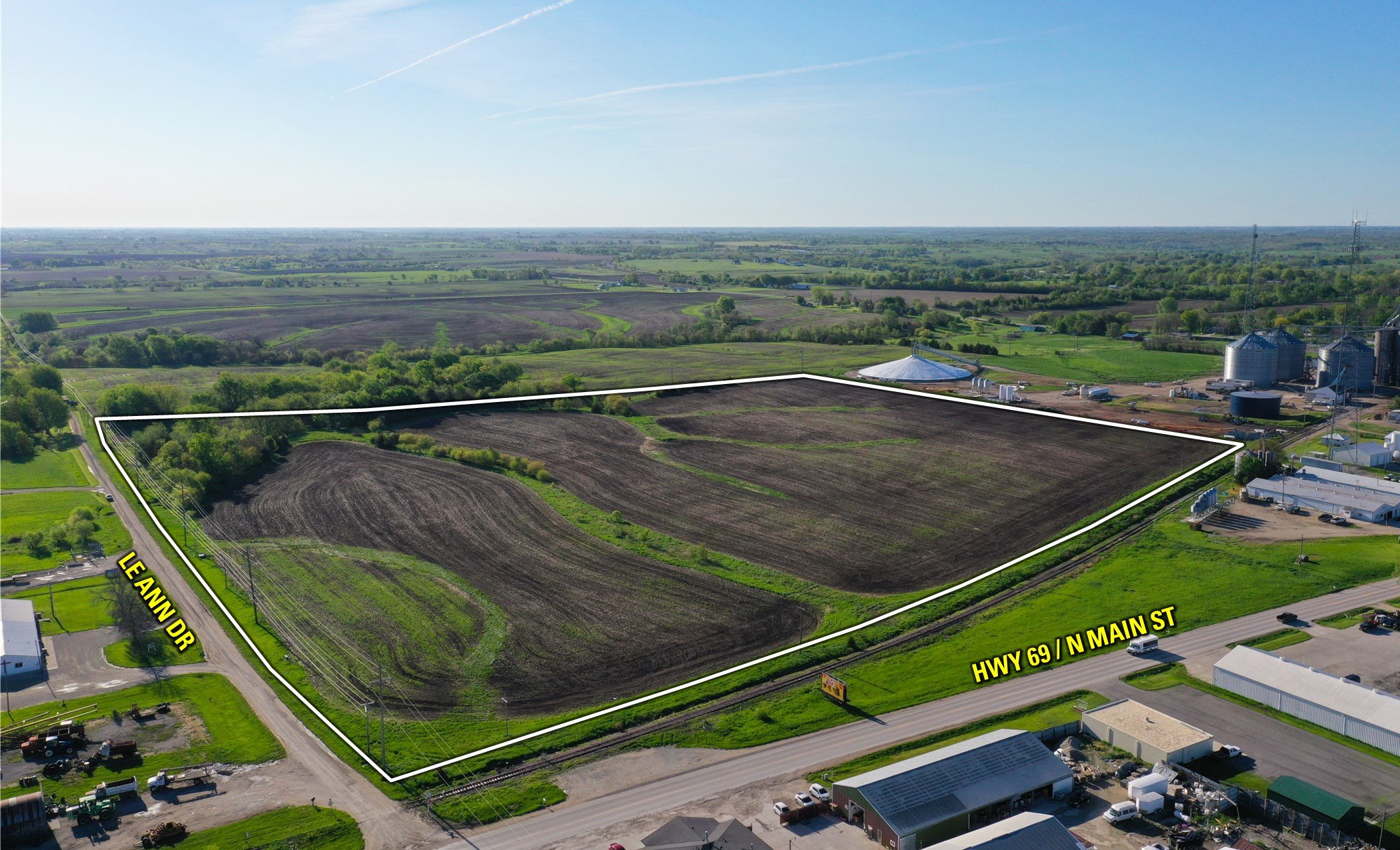 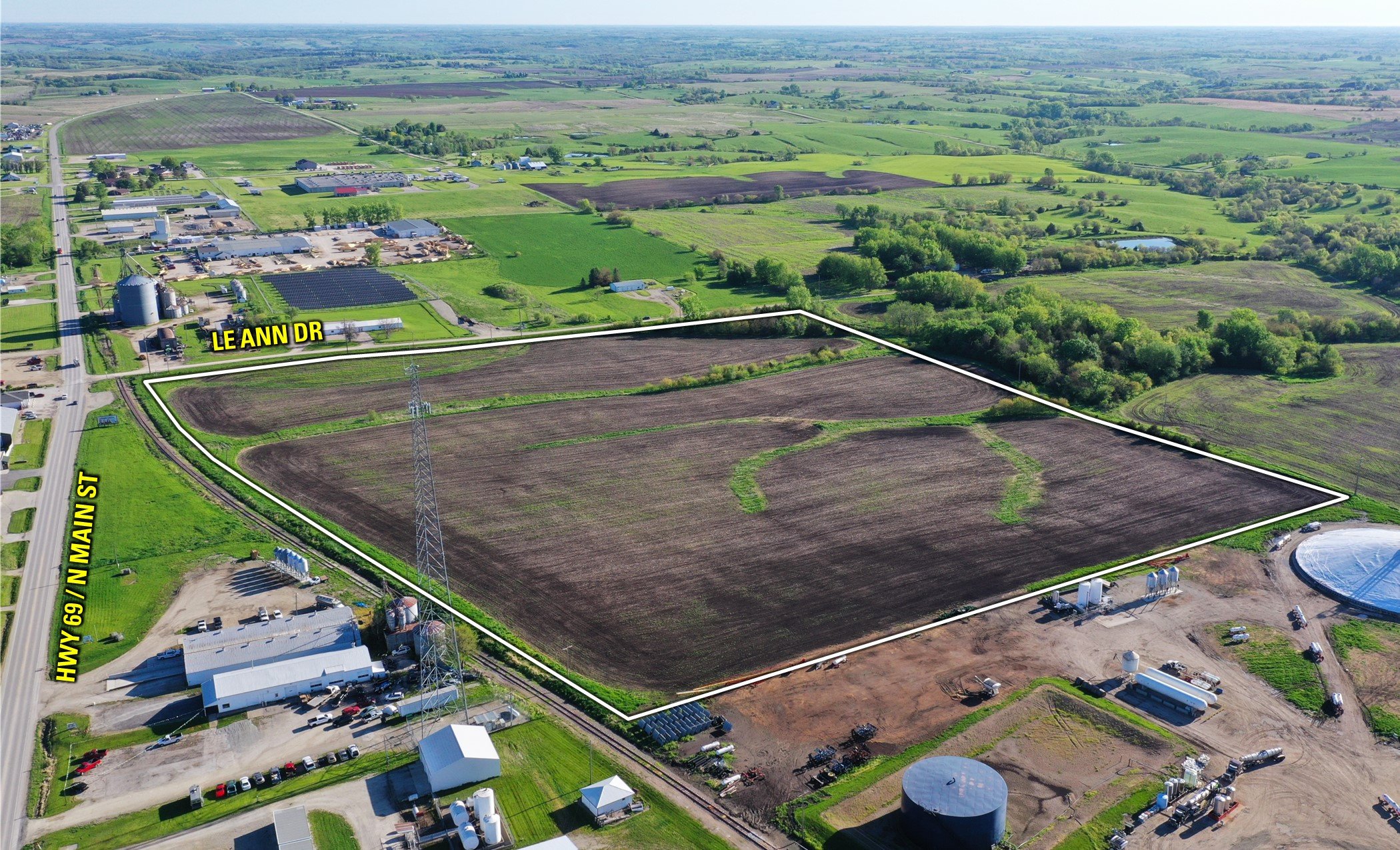 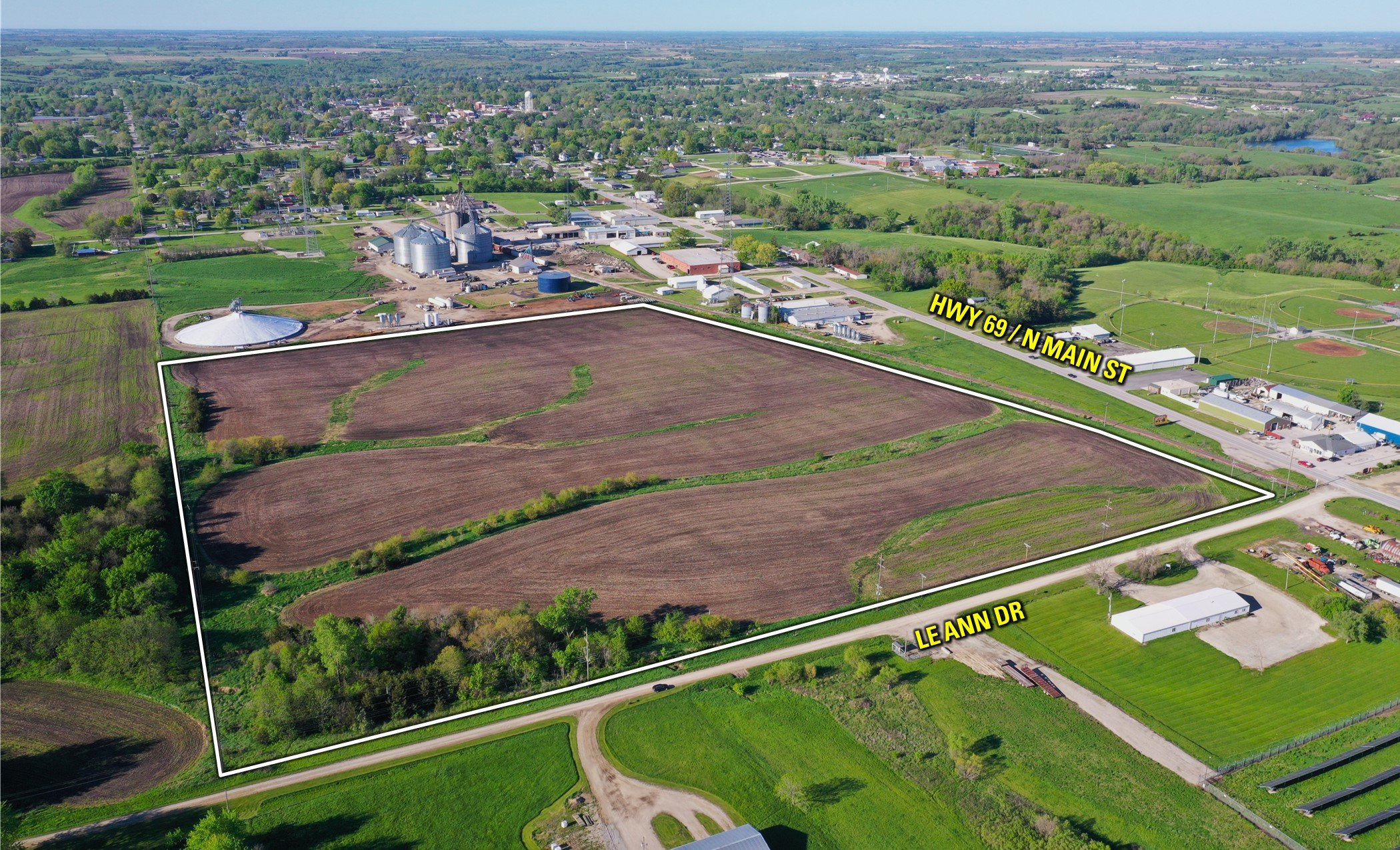 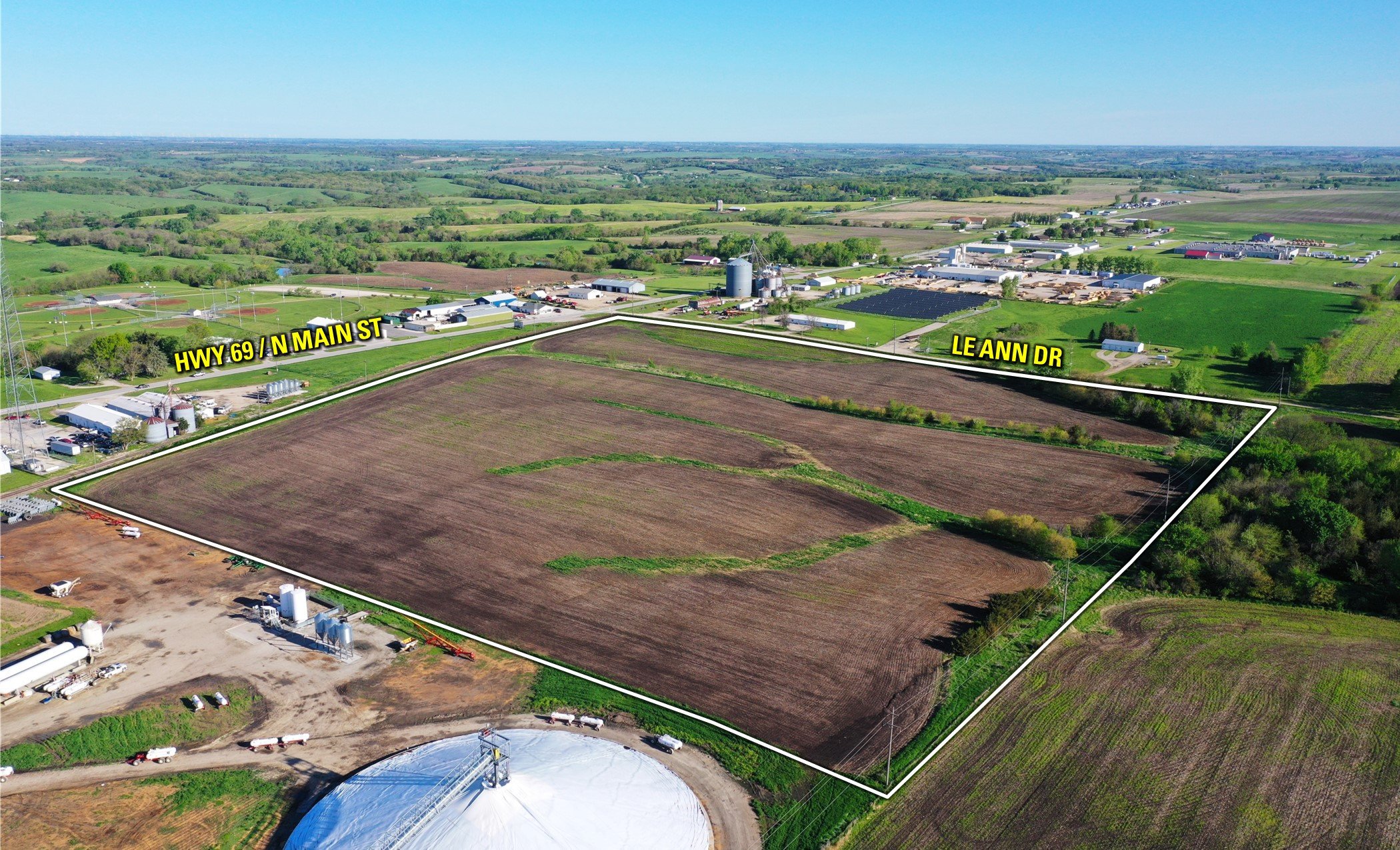 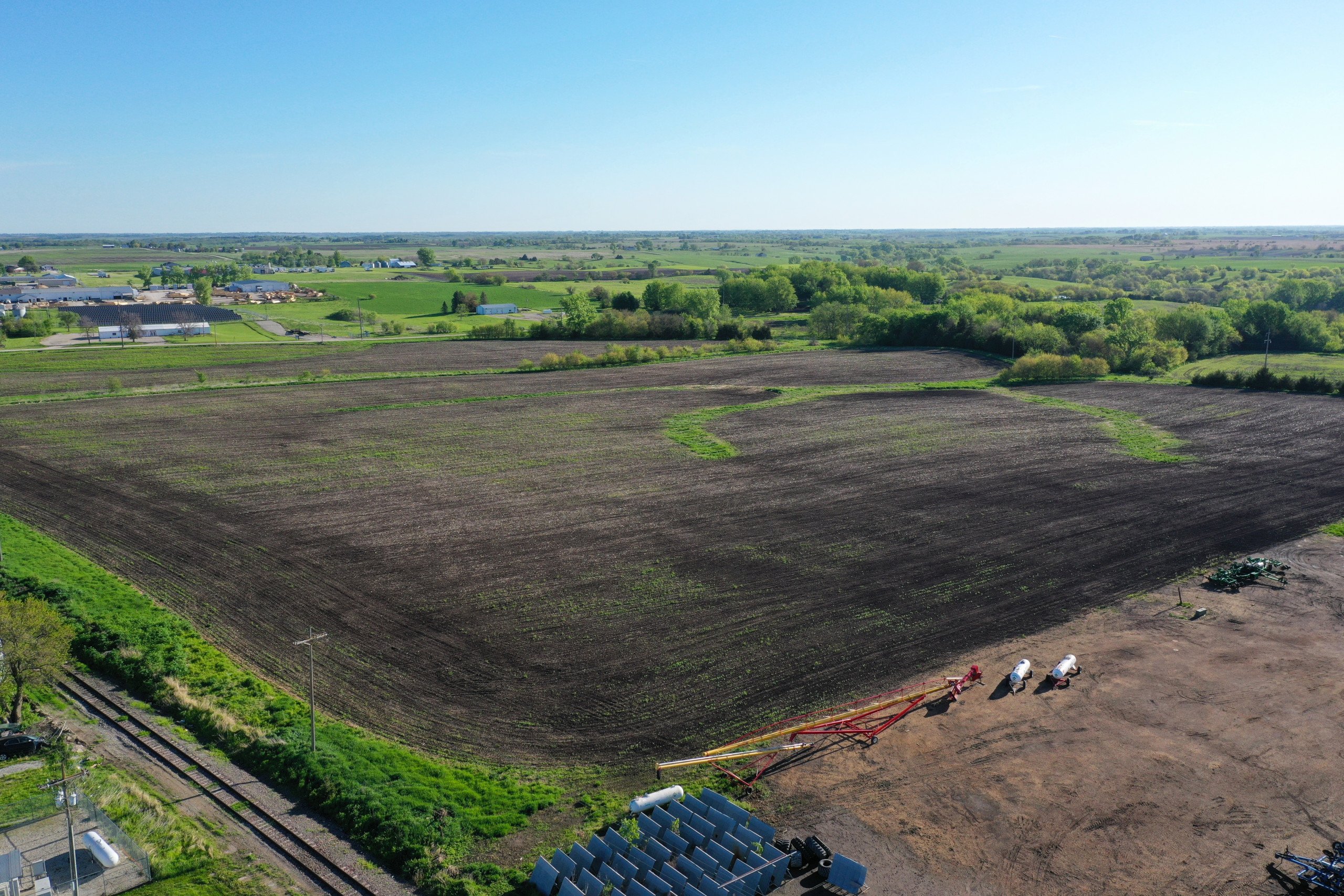 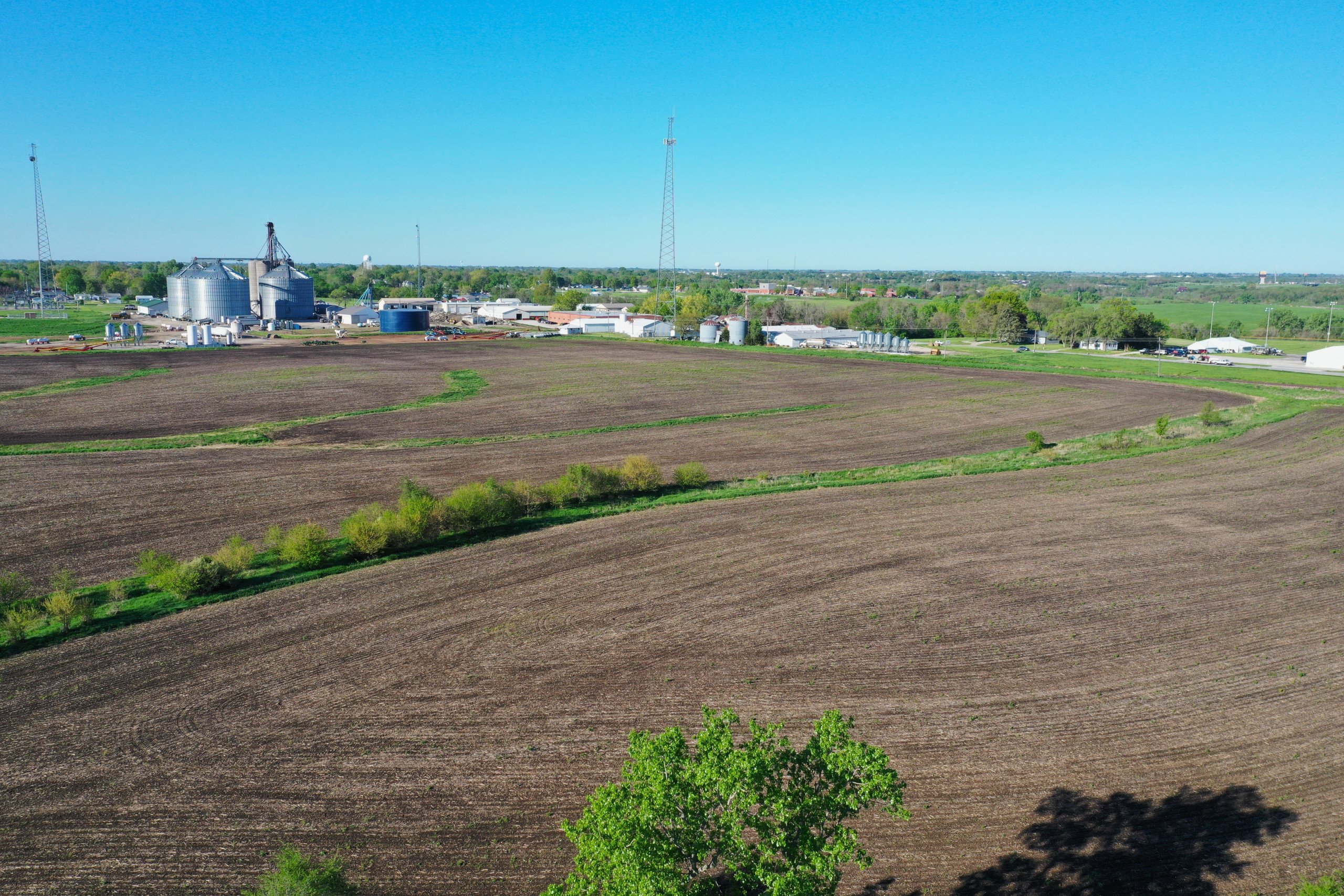 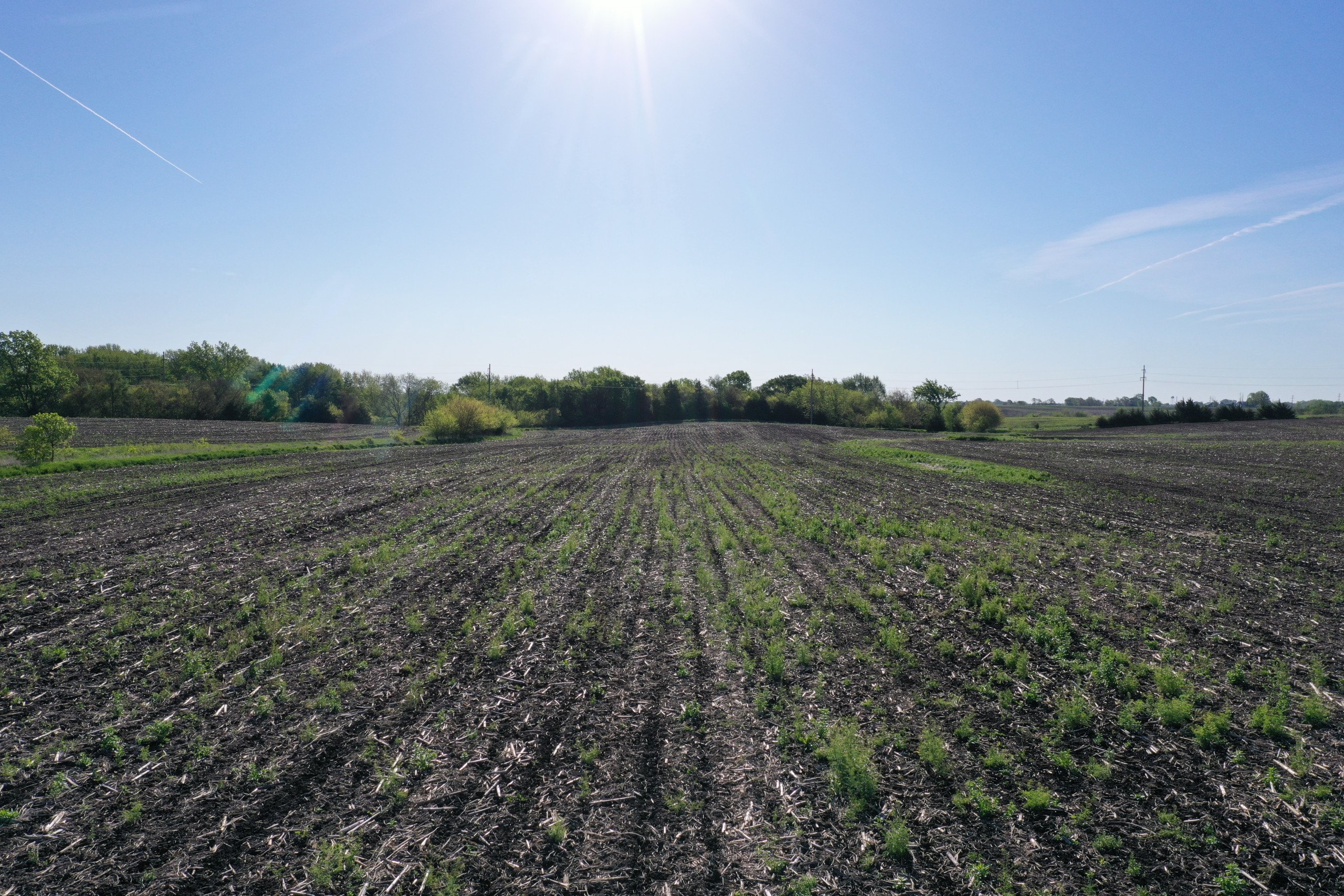 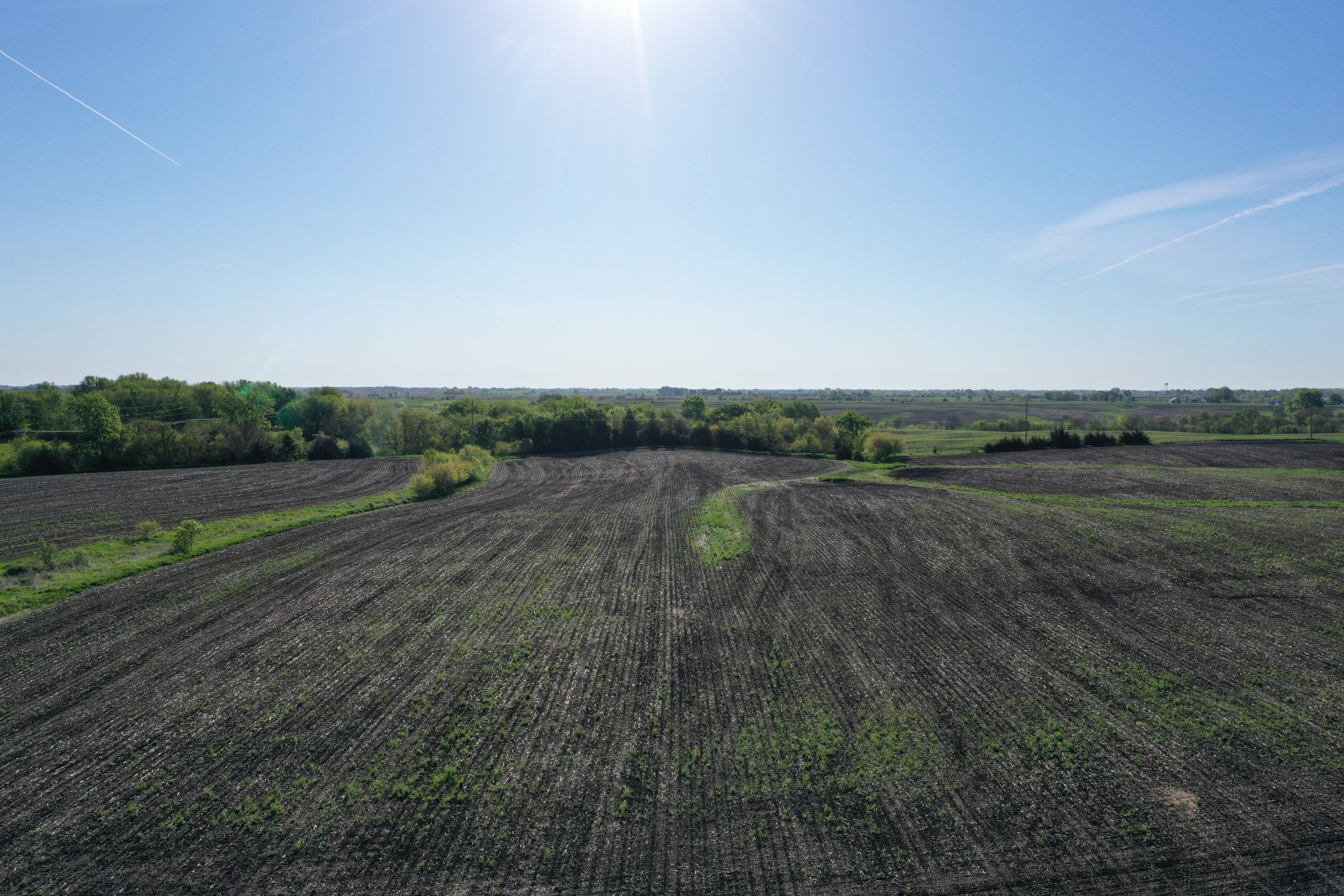 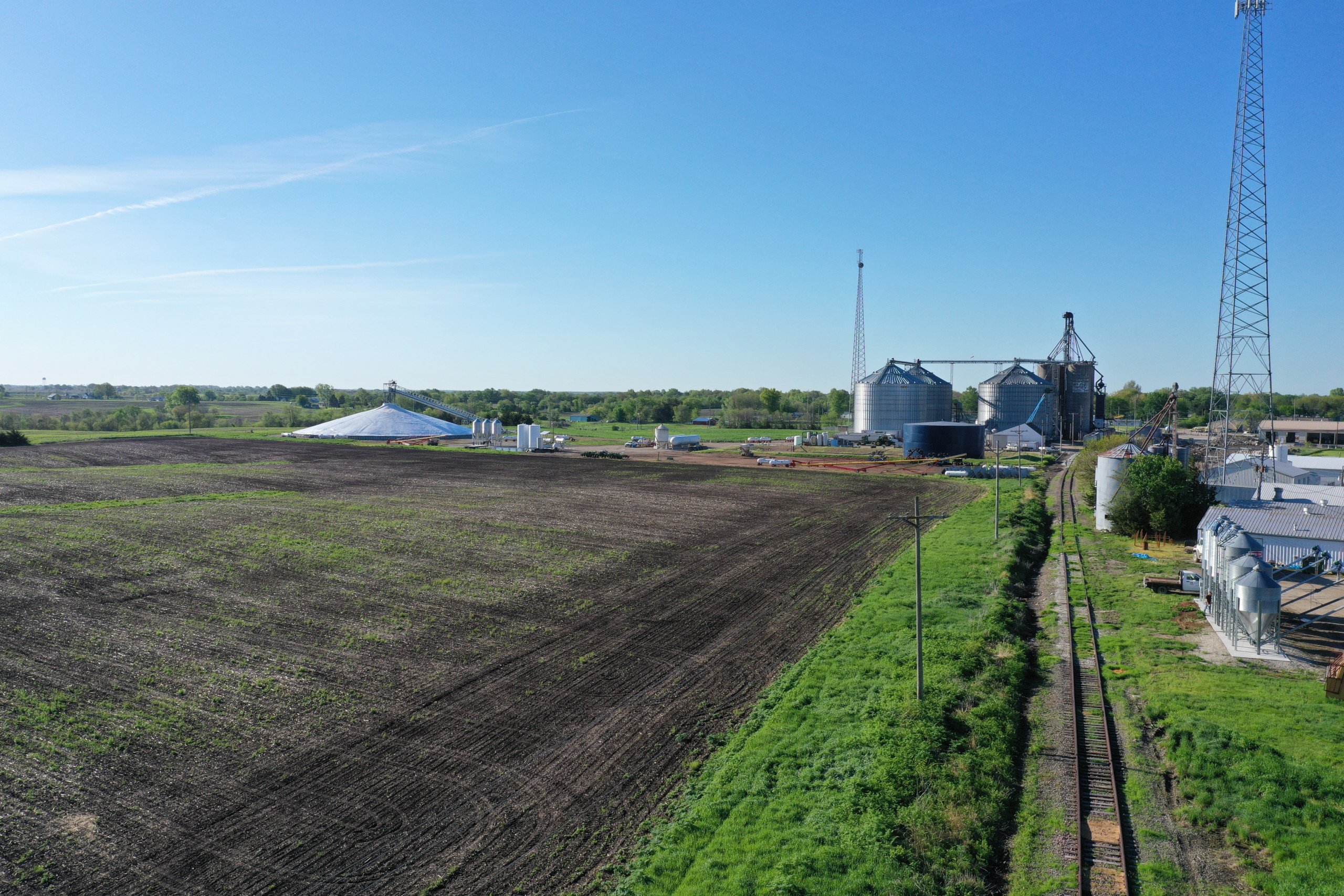 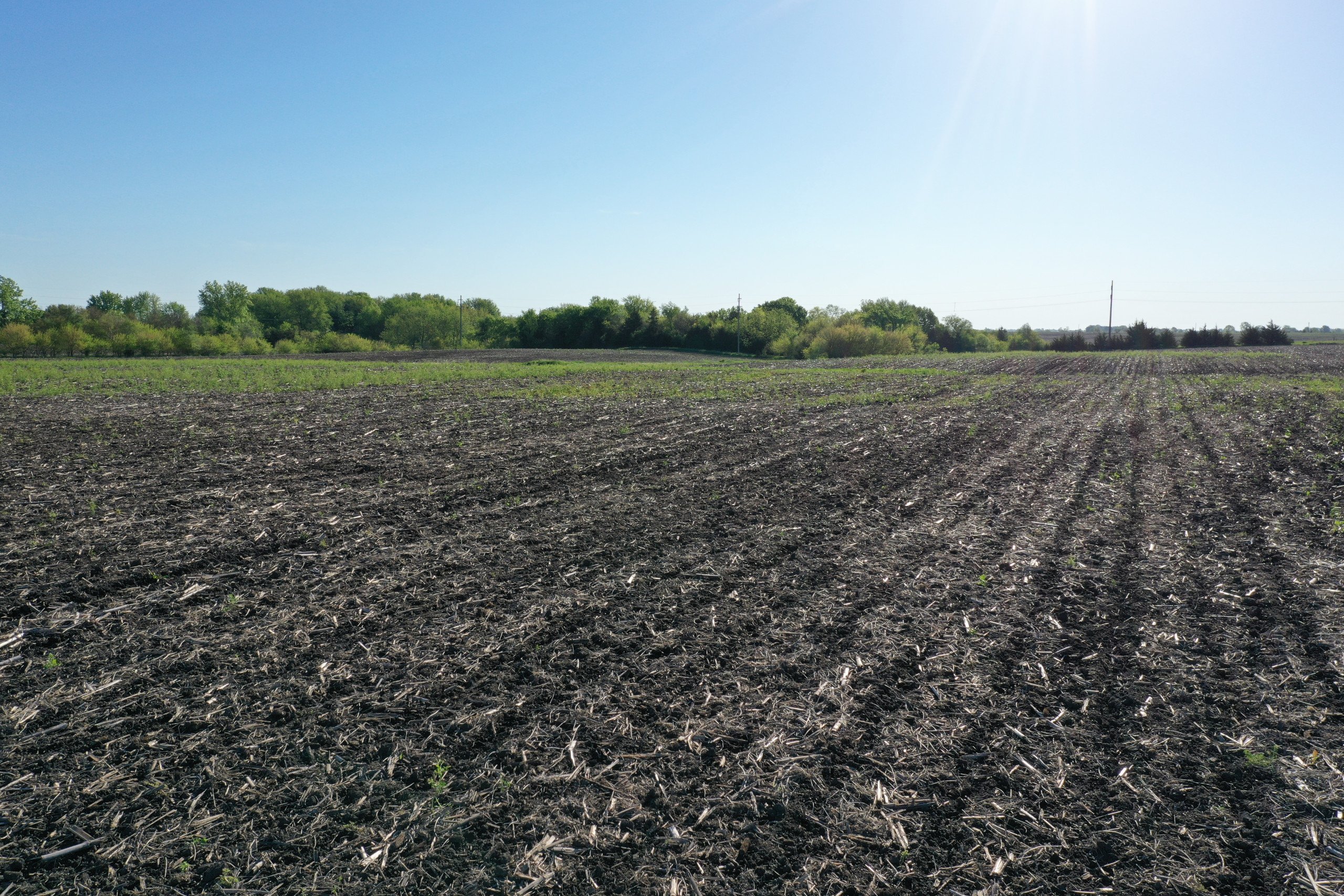 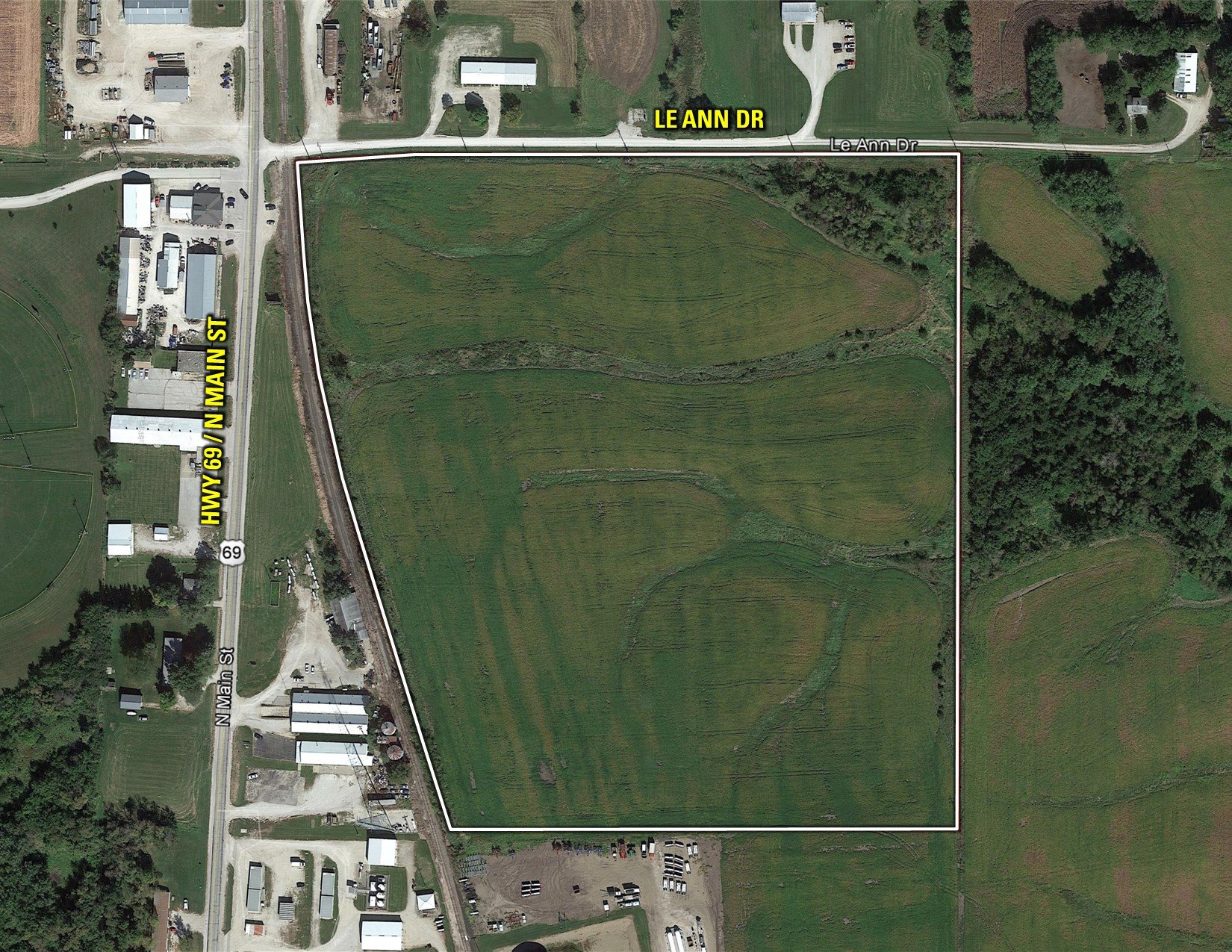 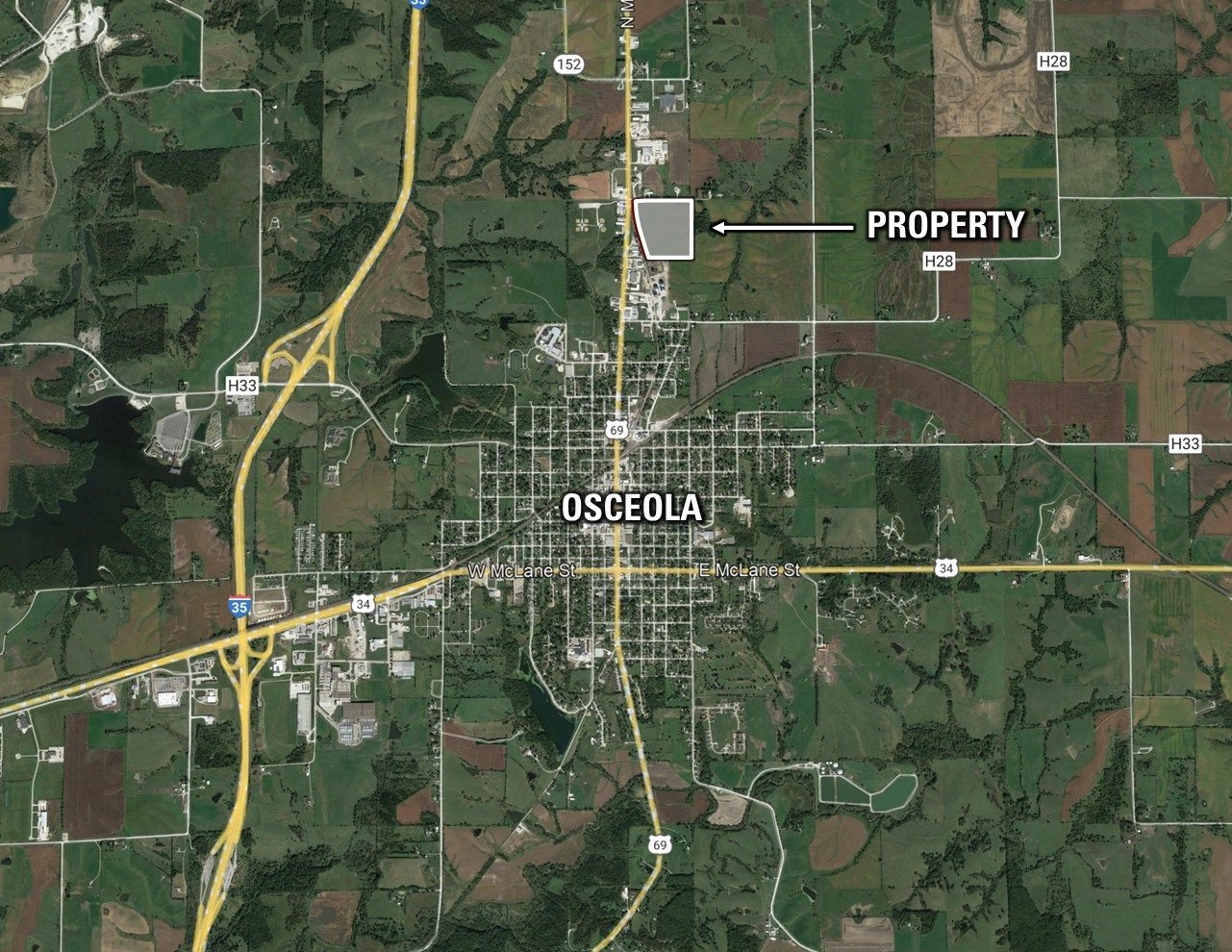